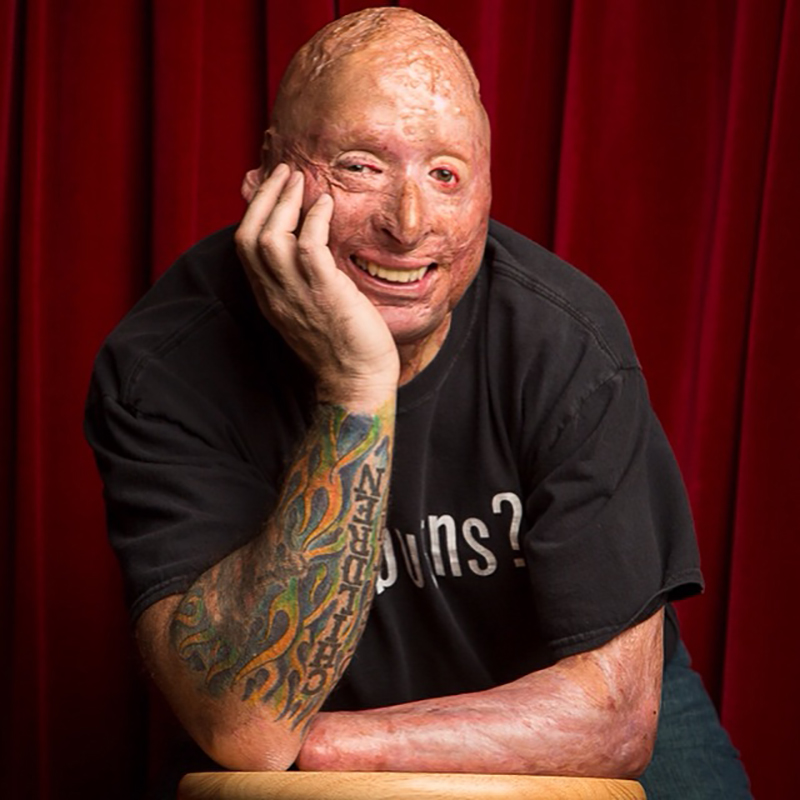 Please join us for our 6th Annual Grey Matters March Dinner to be held at the Newnan Centre, 1515 Lower Fayetteville Road, Newnan. This year we feature a dynamic speaker, Bobby Henline!

Henline is a retired Army Staff Sergeant, last serving with the 82nd Airborne Division. He spent 13 years in the Army, completing four tours. While on his fourth tour in Iraq, three weeks after his arrival, an IED exploded under his Humvee – April 7, 2007 is a day he will never forget. The four soldiers with him were killed. As Henline stumbled out of the wreck, a human torch, he was extinguished by the soldier he had replaced in the Humvee. With burns covering almost 40% of his body, fractured bones in his face, and his head burned to the skull, Henline was put into a medically induced coma for two weeks and was flown back to the states.

During his initial six-month hospital stay, Bobby remained upbeat, positive, and relied on humor to get him through each day. Putting nurses in headlocks, trying to keep other wounded soldiers’ spirits up by telling them jokes, and singing a ditty over and over garnered the attention of his occupational therapist. She challenged him to go to an open mic night and try his hand at comedy, making him promise with a pinky swear. He kept his promise, and that experience started a new chapter in his life. Comedy helps Bobby keep his Post-Traumatic Stress Disorder and Anxiety at bay, and allows him to share his story and healing with others in a positive, funny, inspirational way.

Today, Henline continues his quest to make people laugh in a variety of venues. His professional comedy includes performances as the “Well-Done Comedian” at Brad Garrett’s Comedy Club, Las Vegas; Laugh Factory, Chicago; and Hollywood Improv, Los Angeles, to name just a few. As an actor, credits include the following movies and TV series: “Sophie and the Rising Sun”, “Surviving Home”, and “Shameless”.

Henline’s story and lived experiences have been featured in numerous media, including the documentaries “Comedy Warriors: Healing Through Humor”, “Healing Bobby”, and “Weight of Honor”; on CNN, PBS KET, NPR, Today.com, and Time.com; Time Magazine, People Magazine, The Huffington Post, Guideposts, and Readers Digest; as well as tele-vision, radio, and podcasts around the world.

You can purchase individual tickets for $75.00 each or tables for $750.00. A portion of the ticket or table price is non-deductible. Come join us to hear an inspiring story and support those who need us the most - those battling cancer and facing adversity!